Here are some details on how I constructed the oyster sorter/tumbler found at https://youtu.be/weva9B5Qrgs 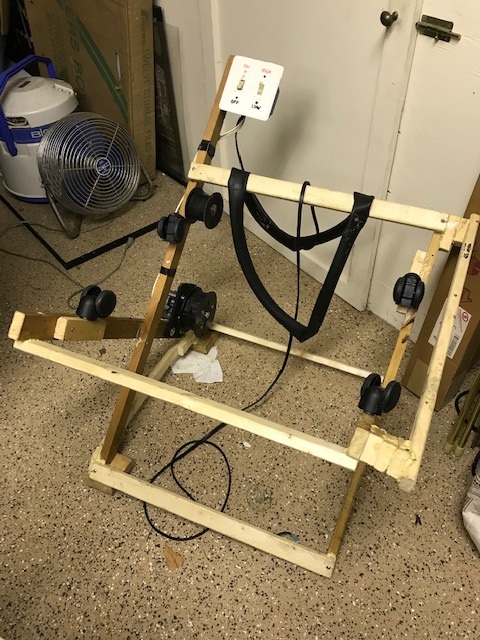 My frame uses 1x2s at right angles to each other.  I wanted some, but not much, clearance between the drum when sitting on the frame and the bucket that will go underneath to catch the falling seed. In my case, the height of the crossbar intersection is about 9.2” vertically and 13” from the bottom ends. My buckets are 15” tall. Thus, the top of the bucket is above the intersection and below the bottom of the drum. You may want more clearance to provide ease and more freedom in placing the bucket. Width was determined so the drum would fit on top and have the rollers not be on the very end. My drum is 25” long, my bucket width is 18” (narrower side) and the frame is 24” wide.

My rollers are casters from office chairs. I suspect single wheel rollers would be better. Rollers were mounted so they would be at 4:30 and 7:30 from the center of the drum, forming a right angle. In my case that was about 10” from where the side pieces intersect. Ten inches is the radius of my drum (7”) plus the length of my rollers (2”) plus an inch.

I first built the frame without fully setting the screws. This made for a rickety frame. That rickety frame allowed me to check to be sure the dimensions would work. I then glued all the pieces together, except one, using the screws as clamps. If you are using Gorilla glue, don’t forget to spray the pieces with water first. The one exception was a 24” 1x2 running the width of the frame on the side where the motor is mounted. I wanted to be able to reposition this bar to be sure it did not interfere with the belt.

My drums have a diameter of 14” and height of about 25”. I suggest drilling holes before cutting of the top and bottom of the drum. That way some of the plastic waste falls inside the drum and can be gathered efficiently. There will still be a mess. A shop vac is handy.  I first determined where I wanted the holes by placing the drum on the frame with a bucket underneath. In my case it is 14” of holes starting 6”  from the end of the drum.  I then made a grid on the drum using magic markers. With the drum on my workbench so the length of the drum was horizontal, I started drawing lines 1.5” apart for ľ” holes. That way there would be approximately ľ” of plastic between the ends of the holes. The holes placement can’t be critical, and I wanted to give myself plenty of room for drilling holes in the wrong place.  On 4 horizontal lines around the drum, I carefully marked off every 1.5” starting at 6” from one end. To mark drill holes for all the horizontal lines, I lined up the measured markers using a knotted bungee cord that was tightly fitted to the drum, and made my tick marks. To save effort,  I skipped making every other tick and estimated their location when drilling. Thus, I ended up with drill hole marks every 3.0” horizontally and every 1.5” vertically.  When I was done, acetone easily took off the marks. 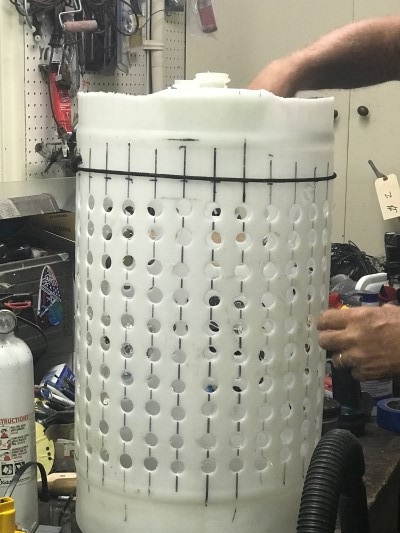 I was most happy using a step drill to cut the holes. Lots of mess, but the holes cut cleanly and easily. It was not the nightmare I expected. I tried a forstner bit. That made nice holes but required too much pressure. Do not try a spade bit. It will catch and make horrible holes. Also, do not use a hole saw. It will take forever because you will have to remove the cut piece after each cut.

I sawed off both ends of the drum so there would be no lip. That was a mistake. The bottom of the barrel should be cut so there is a lip. This will become the high end, i.e. the feed end. The lip would keep seed from rolling out and provide support to keep the drum round. The low side, where the larger seed will roll out, should have no lip.  My future drums will be cut that way. I added two sets of cross bars made from Ľ” x 20 threaded aluminum rod stock to help keep the drum round. They are mounted inboard so there is room to add seed on one side and room for the seed to fall out of the other without getting pinned. I suspect I only need one bar rather than 2 per set.

Windshield wiper motors are known to have low speed and high torque. They are actually relatively fast motors with gearboxes.  Have you noticed that when you turn off the wipers on your car, they always finish the cycle and go to a home position? That’s pretty clever, but we won’t be taking advantage of that feature. It does mean there are pins we don’t need on the motor. First, determine if one of the pins is directly connected to ground by connecting am ohm meter to the metal case and checking each pin. If one pin has zero ohms, it is ground. Now connect the negative of a 12 volt DC supply to the metal case and try each of the pins other than the ground pin. One will be the low speed and the other the high speed. In my case, I used wiper from a 2005 Saab. Pin 1 is low speed, 45 rpm drawing 1.5A and pin 4 is high speed, 70 rpm drawing 2.5A.

I used an old single pole household switch to toggle the 12 volts on and off and a three-way switch to select speed. Better would be a single on-off-on SPDT toggle switch.

Typically, high speed is 60-70 rpm and low speed is 40-50 rpm. This will need to be reduced further. Most of the systems I have found (thanks to Dale Leavitt – see the end of Shellfish grow-out - oysters)  turn their drums about 20 rpm. Perhaps because my drum length is less (I have 14” of holes compared to 24 to 36” for the commercial units), I found slower is better.

Drum rotation speed is determined by the ratio of the drum diameter to the motor pulley diameter.

Thus, in my case

Pulley width is determined from the belt width. In my case I am using an inner tire and needed a width of about 1.75”. I made the 4” diamter pulley by sandwiching three circles cut from plywood using a jig saw. The pieces were not identical, but that might be a feature providing better grip. I will be making a smaller pulley using a hole saw. I coated the pulleys with spray rubber sealant used for gutter leaks to provide better adhesion.

I used a drill press to make a vertical hole through the center of the pulley. The shaft of my wiper motor is 10mm with 1.25 (fine) pitch, so I drilled a hole smaller and tightly screwed a 50mm long m10-1.25 bolt as the pulley axel. A connector nut connected the pulley to the motor. While one can buy a connector nut, I used a stick shift knob m10 to m12 adapter as a connector.  Its inner threads are m10-1.25.

At first, I used an old bungee cord as a belt. It appeared to work fine on the bench, but as I feared, it did not provide enough traction when the drum is full of seed. So, I switched to a bicycle inner tube. I cut the inner tube to length, put one end inside the other, and tried sewing it together on a sewing machine. That did not work. The machine would do a few stitches and jam. So, after a few short stitches, I added some glue. All appears to be fine.  I suggest gluing and manually sewing a few stitches.

The inner tube stretches easily, which makes it easy to change barrels. It does, however, slip when I put in more than 4L of seed at a time. When that happens, I just push the drum a little bit and all is fine. Final solution was to use a low-cost serpentine belt and mount the pulley with one pivotting mount and a bundgee acting like a sprng. Works great.

I hope you found this helpful, if not interesting. If you have corrections, suggestions or questions, please do not hesitate to contact me.