Two to six-millimeter seed are purchased and grown dockside in seed bags. This allows us to purchase seed inexpensively and carefully monitor their initial growth. We use a variant of the intertidal long-line system whereby the bags have a float on one end and the other end is attached to a long line suspended between pilings above the mean low water line. At low tide one side of the bag is out of the water, allowing the sun and air to kill algae, barnacles and other growth that would otherwise cause fouling and compete for food. As the tide rises, the floats gently rock the oysters. While this does inhibit growth, it does result in a more marketable oyster with a deeper cup. Being at dockside, the nursery bags will be easier to flip and be power washed.

Once the seed are 15 to 25mm they are sorted by size and transferred to floating cages on the leased locations. We use floating cages with four bays and two pontoons. A Vexar bag is placed in each bay. Most of the time the pontoons will be on the top, keeping the oysters near the nutrient-rich surface and off the bottom. Periodically, and frequently during the summer, the cages are flipped with the pontoon side down so the entire cage is temporarily out of the water, again allowing the sun and air to kill algae, barnacles and other growth that would otherwise cause fouling. If necessary, the cages will be cleaned by power washing. The endcaps on the floating cage pontoons are removable and the cages sunk with the pontoons down for over wintering.

We originally planned on placing 200 seed in each Vexar bag when we first transferred seed to floating cages. One reviewer of our business plan pointed out that this is extremely inefficient and that the lack of weight in the first two years could be problematic. We use the following density plan based on the suggested densities posted at the Hoopers Island Oyster Company website.

By varying densities, we make very efficient use of the expensive floating cages and far fewer cages will be needed to achieve our initial goal of 100,000 harvest sized oysters per year.

While waiting for our lease application to be approved, we purchased a large number of seed which we are raising off our dock. They will be transferred to floating cages once our leases are approved. This will increase the likelihood we will meet our goal of 20,000 oysters to sell in year 1 and therefore allow us to start making money in Year 1 rather than Year 2. It also means we will start the farm with 50 cages, 20 cages for the incubator oysters and 30 cages for new seed.

Once harvested, we hope to be able to bathe our oysters in a salt brine of 18-25 ppt. This will give the oysters a slight salt taste. Hoopers Island Oysters does something similar for their Chesapeake Gold oysters headed to the Las Vegas market. We will discuss this possibility with HACCP once we are near ready to begin marketing our oysters.

We have applied for two lease locations, both selected for their proximity to already owned property. The closer location, which is ¼ mile from our dock and 1.7 acres, will primarily hold market size and larger oysters. The other 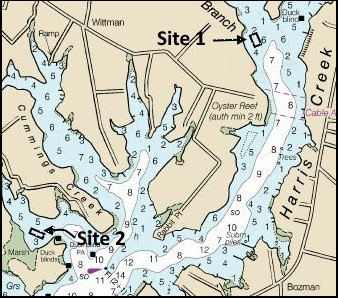 location, which is 2 miles from our dock and 1.9 acres, will be primarily for grow-out and winter storage. That site is more isolated and has the hard bottom needed for successful overwintering.

We already own waterfront property with a 165’ dock. We have a dock-side fuel pump allowing us to buy and use non-ethanol gasoline. Our property has a 750 square foot auxiliary building less than 250 feet from the end of the dock. That building will be used for storage of equipment and have a refrigerator for temporarily housing harvested oysters.